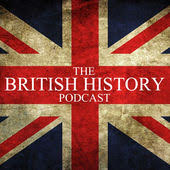 The British History Podcast
“History the way it is meant to be heard”
By Jamie Jeffies
https://www.thebritishhistorypodcast.com/

Editor’s note: Share your favorite podcast with The Falcon Banner. Send your review to rex.deaver@gmail.com.

This is an interesting podcast that I just began listening to, so I’m still in the period of the Roman occupation of Britannia. It’s a period of England’s history I know less about, so I can’t speak to Jeffries’ accuracy, to whether he glosses over too much or leaves essential bits out. Perhaps when I get to the Anglo Saxons I’ll have a better idea of how accurate he is. But so far he hasn’t said anything I know was incorrect. And his approach is engaging, so I’ll keep listening. Jeffries began his podcast in May 2011 and currently is at episode 265.

Jeffies is a Brit with an American accent. He was born in the UK but grew up in the states. I’ll be listening along, lulled by his accent into forgetting this until he says  something about “here” or “just a few miles from my home,”  suddenly reminding me that he’s British.

Jeffries explained that he learned history at the knee of his grandfather, who told him tales of the land of his birth. Jeffries wants to make history that interesting for his listeners, and I think he succeeds to some extent. It may not be the thrilling tales he learned as a child, but it moves along at a decent clip.

He began with Ice Age Britain, spending an episode looking at what we know from paleontology and archeological finds. The next few episodes look at Julius Caesar’s trips to Britannia, then other Roman emperors’ interactions, and of course on to Claudius. By episode 22 we’re up to the crisis of the third century and the rebellions in Gaul. This should give you an idea of how fast (or slow) the podcast is moving.

Jeffies likes to include the archaeological record, sometimes disputing accepted canon. He’ll note that the number of people killed in a certain battle has to be wildly exaggerated. After all, where are the bodies? He also looks at the various walls built, noting when they were abandoned, reoccupied and so forth, to determine if the northern tribes might have made inroads at certain times.

Jeffries also throws in comments about pop culture, mentioning movies that cover this period of history. (For example, he loves Gladiator and hates The Eagle). He also discusses problems with the historical record or competing theories about how or why something happened. His discussion of the disappearance of the 9th Legion should be of interest to a lot of folks.

And he interacts with his listeners. Like many podcasters, he asks for and answers questions submitted on Facebook or his webpage. Or he says something to acknowledge others might disagree with him. When he describes how Scotland’s rocky, hilly landscape full of waist-high thistles made the area less appealing to the Romans, he’ll make a comment like, yes, Tom, I know the north is beautiful, but that wasn’t why the Romans wanted to go there.

Jeffries’ primary fundraising is through monthly memberships on his website. For $4.99 a month members receive access to members-only episodes, timelines, transcripts and members-only boards. For example, members-only episodes offered during the early time period I’m listening to include one on Celtic literacy and another on the Hallstatt culture. I haven’t done this, but might. He has at least 90 members-only podcasts available by the 10th century.

The website also has some value. There’s a good list of sources, a massive family tree of early English rulers, and maps. There are maps of Britannia during different eras, Anglo-Saxon migrations, the locations of various battles and where Hadrian’s wall was.

My only real complaint is his choice of music. During one battle between the Romans and Celts he played some kind of stylized Native American music – not real Native American music, but some kind of odd take that involved a lot of screeching. At other times he plays 21st century music that’s a bit jarring. One time he just played cows mooing to indicate nothing was happening in Britannia. And some of his episodes are quite short. When you wait two weeks for something, it would be nice if it was more than 20 minutes long.

The British History podcast currently is in the early 10th century, just after the battle of Tettenhall.