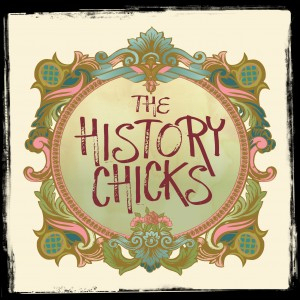 The History Chicks
“Two women. Half the population. Several thousand years of history. About an hour. Go.”
By Beckett Graham and Susan Vollenweider
http://thehistorychicks.com/

Graham and Vollenweider’s podcast focuses on historical women, both real and fictional. They look at the politics, royal intrigues, social or legal restraints these women faced, the obstacles they overcame and what life was like in their time.

These are biographies for the most part, sometimes combining women in an episode, such as the “Tudor Grandmothers” episode about Margaret Beaufort and Elizabeth Woodville.

The two began podcasting in January 2011 with an episode about Marie Antoinette and are now up to 145 episodes, more than 100 full episodes an hour or more long and 44 “minicasts” of 15 to 45 minutes. Minicasts are sometimes used to cover material that doesn’t neatly fit in an episode, like the “Teeny Tiny Tudor Tutorial” that looked at how the various players from Henry VII to Elizabeth I were related.

Graham and Vollenweider don’t cover historical figures in chronological order, but they do have a chronological list on their website of women they’ve discussed from the earliest, Hatshepsut, to Shirley Chisholm, who died in 2005. The pre-17th century women (and a few just over the edge of SCA period) are:

They also look at fictional characters, such as Mrs. Claus and Little Red Riding Hood, and have spent time on the women of Gone With the Wind, Jane Austen’s characters and the women of Oz. Sometimes  they look at an era rather than an individual. Their episodes on “The Gilded Age” and “1950s Housewives” are good examples of this.

Graham and Vollenweider take a conversational approach to presenting their material. It’s not as bad as if Today Show hosts Hoda Kotb and Savannah Guthrie decided to discuss Cleopatra, but it has that back-and-forth conversational feel. This is not my favorite way to listen to history, but the pair cover material others often don’t. And they could use a better mike. Compared to most other podcasts, their audio quality is poor.

But the duo is from the Kansas City area, so I have a soft spot for them. And they sprinkle current cultural references in their talks. A good example of this is when they describe Richard III  as “Scar from the Lion King,” the kind of pop culture reference that makes it easier to follow complex family relationships.

The website is good, with additional content and many illustrations. They also have a Pinterest page with illustrations of some of their subjects. They have a non-Patreon button on their website for donations, and they sell t-shirts, coffee mugs and cloth bags with quotes from some of the women they’ve profiled.

In the summer of 2017 the duo began “minicast” recaps of the first six episodes of the Netflix series “Anne with an E,” a new take on Anne of Green Gables. In December 2017 they spun off a new podcast, The Recappery, as a place for them to discuss other female-oriented historical fiction. The new one- to two-hour recaps of television, movies and other media began with recaps of “The Crown” season 2. I suspect they will cover fewer fictional women in the main podcast now.

The History Chicks began in January 2011 and their most recent episode is 102, posted in late February 2018.