Reposted from the East Kingdom Gazette:

Our seventh A&S Research Paper comes to us from Baroness Charitye Dale, of the Barony of Settmour Swamp. She examines a question that would have affected our personas practically every single day – how did people manage before toilet paper? (Prospective future contributors, please check out our original Call for Papers.) 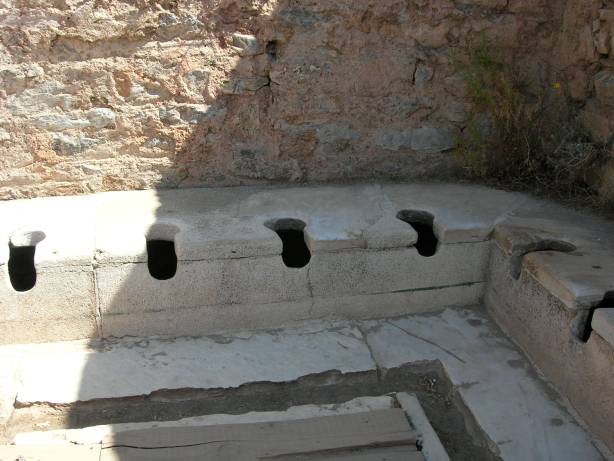 There are some things in our society that are so basic, so integral to our lives that we cannot imagine going without.  Toilet paper is one of these items.  Since 1857, when toilet paper first became commercially available, we have used it to cleanse after using the bathroom.  This begs the question; what did people use to clean themselves before toilet paper?  This work will provide an overview of what people used to cleanse themselves after defecating in Rome, China, Japan, India, the Islamic states and various areas of Europe between 400 C.E. and 1600 C.E.

Rome
We begin in Rome, in the communal toilets adjacent to the city’s bathhouses.  These communal bathrooms were semi-circular or rectangular rooms containing long benches along the walls, with individual round spaces carved into them.  Running water flowed underneath them to wash away the waste.  According to William E. Dunstan in his book Ancient Rome, “Public latrines, though often lavishly decorated with statuary and singing fountains, proved dimly lit and poorly ventilated.  They became overcrowded retreats for the unprivileged living in multistory tenements lacking toilets.” [1]

Lucius Annaeus Seneca, in his series of letters known as Moral Letters to Lucilius references a sponge affixed to a stick as being used for cleansing after defecating.  In his 70th letter, he relates a tale of suicide in which this implement, commonly referred to by scholars as a spongia, played a pivotal role.  “A captured German, who was making ready for the morning exhibition, withdrew in order to relieve himself, the only thing he was allowed to do in secret and without the presence of a guard.  While so engaged, he seized the stick of wood, tipped with a sponge, which was devoted to the vilest uses, and stuffed it, just as it was, down his throat…”[2]  To date, there appears to be no other specific reference to the spongia in ancient text.

The Roman elite used chamber pots or toilets within their own homes instead of using the communal commodes whenever possible.  Instead of the spongia, it is conjectured that they cleansed with rosewater and soft wool while in their homes.[3]
Back to Top

Buddhist Precepts for Monks in India
We move from Rome to India, where Buddhist monks were fastidious about cleanliness.  So fastidious, in fact, that they had very particular rules regarding the use of the bathroom.  These rules are outlined, in detail, in early versions of the Vinaya Pitaka, the Buddhist canonical for monks.  Each of the seventeen rules were to be followed each time one used the toilet facility.

Further evidence to the Buddhist doctrine of cleansing after defecation is found in an anecdote within their guidelines for monks which tells a story of the consequences of not rinsing oneself after defecating:

The monks utilized what they referred to as a wiping stick to scrape feces after defecating.  The stick was smooth and slightly rounded, and was used to remove large pieces of feces before the monks rinsed themselves with water.
Back to Top

Islamic Precepts for Worshippers
Buddhism is not the only religion that has strict rules about personal hygiene.  Worshippers of Islam had similarly stringent requirements for cleanliness.  The Qur’an is adamant about personal hygiene, which is why it is not surprising that Muslims also had very specific rules when it came to cleansing after defecation.  Abu Hureyrah, companion to the prophet Muhammad, narrated many edicts to the followers of Islam; cleansing after defecation included, between 590 and Muhammad’s death in 632 C.E.  “When any one of you goes to the Gha’it (toilet to defecate), let him take with him three stones and clean himself with them, for that will suffice him.”[6] He also stated, “I never saw the Messenger of Allah come out of the toilet without first (cleansing himself) with water.”[7]

Rules, based on the narrations of Abu Hureyah, are outlined in Qadaa’ Al Haajah.  A redacted set of these rules is itemized below.

One will note that the process of cleaning oneself after defecating is specifically addressed.  The utilization of one’s own hand appears to be the preferred method, followed by rinsing and washing the hand. 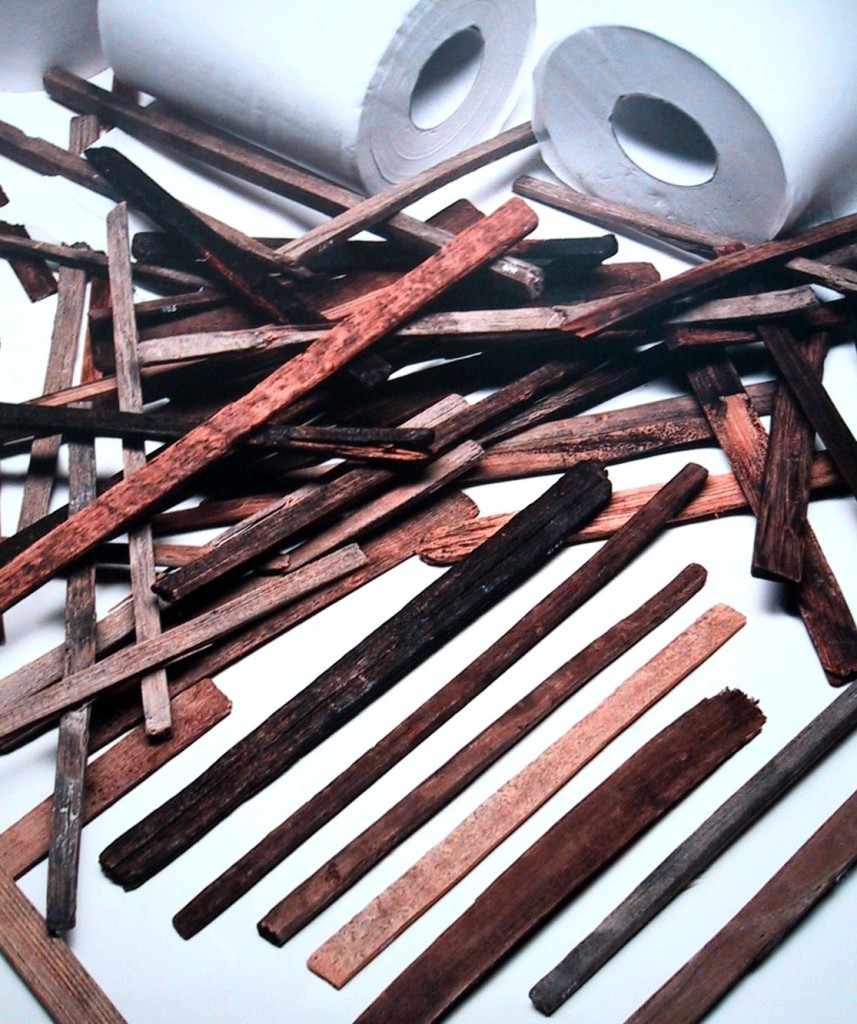 Japan
The Japanese, like the Indian Buddhists, used sticks to clean themselves after defecating.  Flat, rounded sticks, called chu-gi, were uncovered in ancient cisterns dating as far back as 750 in the ancient Japanese capital of Nara.  During what is called the Nara Period, between 710 and 784, the capital had 10-15cm trenches dug and water diverted through them, making a drainage system.  Citizens would squat over these trenches, with a foot on each bank of the trench to urinate and defecate; the waste being washed away from the city.  The dirty sticks would be washed in the running water, and retained for future use, or dropped in the trench for disposal.[9]
Back to Top

“I have, answered Gargantua, by a long and curious experience, found out a means to wipe my bum, the most lordly, the most excellent, and the most convenient that was ever seen.  What is that? said Grangousier, how is it?  I will tell you by-and-by, said Gargantua.  Once I did wipe me with a gentle-woman’s velvet mask, and found it to be good; for the softness of the silk was very voluptuous and pleasant to my fundament.  Another time with one of their hoods, and in like manner that was comfortable.  At another time with a lady’s neckerchief, and after that I wiped me with some ear-pieces of hers made of crimson satin, but there was such a number of golden spangles in them (turdy round things, a pox take them) that they fetched away all the skin of my tail with a vengeance.  Now I wish St. Antony’s fire burn the bum-gut of the goldsmith that made them, and of her that wore them!  This hurt I cured by wiping myself with a page’s cap, garnished with a feather in the Switzers’ fashion.

“Afterwards, in dunging behind a bush, I found a March-cat, and with it I wiped my breech, but her claws were so sharp that they scratched and exulcerated all my perinee.  Of this I recovered the next morning thereafter, by wiping myself with my mother’s gloves, of a most excellent perfume and scent of the Arabian Benin.  After that I wiped me with sage, with fennel, with anet, with marjoram, with roses, with goud-leaves, with beets, with colewort, with leaves of the vine tree, with mallows, wool-blade, which is a tail-scarlet, with lettuce and with spinach leaves.”[12]

By the end of his diatribe, there is seemingly nothing that the young man won’t use.  In fact, when he comes to wiping with paper, he has this to say, “Who his foul tail with paper wipes, Shall at his ballocks leave some chips.”[13]

It is suggested in numerous works on the subject that leaves, moss, shells, and the like would have been used for cleaning after defecation, though none of these works have been able to provide evidence to support their assertions.  It is not unreasonable, however, to make such a conjecture.  A soft leaf, unspun wool, and straw would have proved to be useful if no other means of cleansing were available.
Back to Top

China
While their Western counterparts were using leaves, rags, or sponges soaked in saltwater, and other areas of Asia were using sticks to clean their anuses, the Chinese were manufacturing paper to address their sanitary needs.  There is little written on the invention, manufacture, and use of the predecessor to the modern toilet paper, but there is mention of paper being used in the eliminatory process as far back as the first century.  Joseph Needham, in his collection of works entitled The Science and Civilisation of China, cited that the Chinese used paper made from rice straw for sanitary purposes.  Chinese scholar Yan Zhitu stated in 589 that “paper on which there are quotations or commentaries from Five Classics or the names of sages, I dare not use for toilet purposes.”  Additionally, an Arab explorer during the Tang Dynasty, is noted as having stated “They [the Chinese] are not careful about cleanliness, and they do not wash themselves with water after they have done their necessities, but they only wipe themselves with paper” in his memoirs detailing his travels to China.[14]

The Chinese eventually began manufacturing a specific type of paper to use after defecation, known as tshao chih.  According to Chinese records maintained by the Imperial Bureau of Supplies, over 720,000 sheets of tshao chih were manufactured in 1393 alone.   The imperial family, however, received “…15,000 sheets, three inches square, light yellow, thick but soft, and perfumed.”[15]  In fact, the use of tshao chih was so prevalent, Zhejiang Province (aka Chekiang Province) alone used ten million packages of 1,000 to 10,000 sheets in 1393 for its population of 2,138,225.[16]

Until the 19th century, paper was made exclusively by hand, and therefore, was more expensive to procure.  It would have been more cost effective to use materials that were readily available, such as leaves and old rags instead of paper.  As paper became easier and less expensive to manufacture, its use for cleansing after defecating became more common and eventually took its place as the preferred method for cleaning in most parts of the known world.  Today it is estimated that modern Americans use approximately 100 rolls of toilet paper per year.  With nearly 390,000,000 people in the US, Americans use 39,000,000,000 rolls of toilet paper each year.
Back to Top

[9] Chavez, Amy “From the ditches of Nara to the Otohime, a lav story” The Japan Times