Crossposted from the East Kingdom Gazette, for those Calontiri who knew His Grace Kenric:

“When righteousness and mercy are associated in the ruler’s authority, he may, while soothing the hearts of his subjects, inspire them with reverence, and, whilst correcting, sooth them. So spoke Alfred, great King of the Saxons, and it is as if he had known Kenric ætEssex.” – From the ducal scroll of Kenric æt Essex

Duke Kenric æt Essex, Knight, Laurel, has been declared lost at sea following a boating accident on Friday, January 12th. Kenric was one of the most highly accomplished and beloved citizens of the East. He and his wife, Avelina Keyes, reigned three times as King and Queen of the East. He was the only person in the history of the East to be inducted into five orders of High Merit. Prior to his first reign as King of the East, he served as East Kingdom Brigantia Herald for four years, then subsequently as Kingdom Chamberlain for two years, and at the time of his death was serving as East Kingdom Marshal of Armored Combat.

Kenric was a fixture in his home Barony of the Bridge for decades and was a leading member of Duchy Von Drachenklaue and of House Silverwing. He recieved his Award of Arms in the Fall of 1994 from Lucan II and Jana II and was shortly thereafter inducted into the Pillar of the Bridge for his contributions to his local group. He was a companion of the Order of the Sagittarius (1998), of the Silver Crescent (1999), of the Maunche (2000), of the Tygers Combattant (2001), of the Chivalry (2002), of the Silver Rapier (2014), of the Laurel (2014), and of the Golden Rapier (2017). In addition, he held the rank of Master Bowman.

For his courtesy and deportment in the Crown Lists, he was awarded the Shield of Chivalry four times. He twice served as Queen’s Champion of Arms and also won the position of King’s Champion of Arms three times. He was recognized with the Order of Valor of the East by Darius II and Roxane II at Pennsic 32 in recognition of his valor on the battlefield.

Kenric was a skilled metalworker, who at this past Pennsic was one of Champions representing the East for the Arts and Sciences War Point. He also did extensive and immersive research on Anglo-Saxon culture and language, learning to read and speak Anglo-Saxon English and striving at all times to make his person and persona as historically accurate as possible, to make history real and tangible to enhance both his own experience and that of those around him. To note only one vivid example, he was a performer in a battlefield telling of Beowulf at Pennsic XLII during his first reign. As one audience member described it, “when it came to be his turn he rose from his high seat to speak just as the sun was setting. He was exactingly dressed for the role, and as the light shifted from the setting sun to the torches in the tent, the Anglo-Saxon King of the East spoke the words of King Hrothgar in the original language that the poet put in that king’s mouth. We were transported.”

Kenric and Avelina reigned three times in the East. At the end of their first reign, Kenric “retired” his original persona and name of Kenric of Warwick, and at the Coronation of Edward II and Thyra held elaborate funeral rites for the death of the King, culminating in the elevation of Prince Edward and Princess Thyra to the Crown. The story of the passing of King Kenric captured the imagination of many in the East, and a number of artworks, stories, and songs were inspired by the life of “Saint Kenric of Warwick of Blessed Memory”. During their second reign, Kenric adopted the persona of Kenric æt Essex, cousin of the original Kenric, who had married Avelina and who again reigned in the East. During their third reign, Kenric instituted King Kenric’s Challenge, whereby he pledged to personally reward any and all Eastern Citizens who completed two, three, or four war point activities in armored combat, rapier, archery, or thrown weapons at Pennsic War.

Kenric is survived by his beloved wife, Duchess Avelina Keyes, and their daughter, as well as a wide circle of family and friends. An interfaith Memorial Service will be held this Saturday, January 20, 2018 at noon at Saint Benedict’s Church in Warwick, RI. 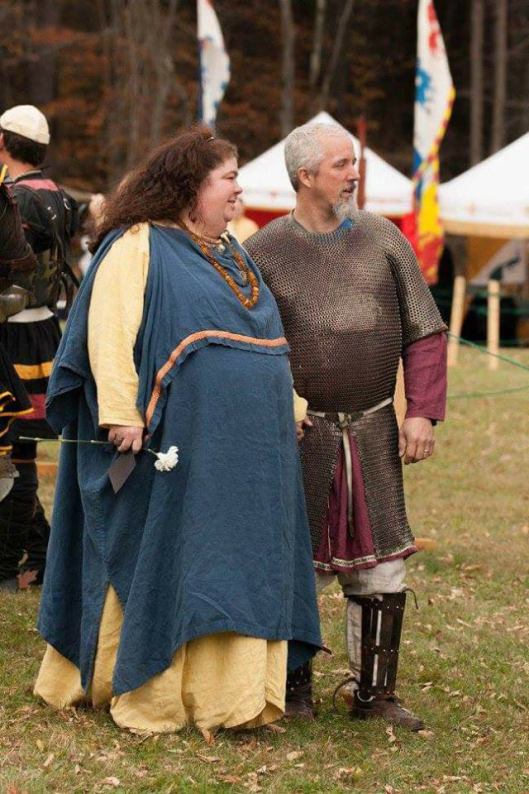