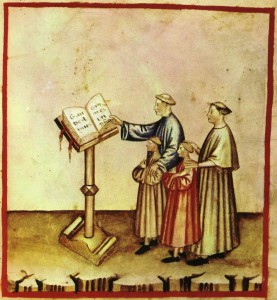 One of the first podcasts I started listening to when I first got into podcasts back in 2014 was The Saga Thing podcast. It is an episodic overview of the Iceland family sagas by two Medieval history professors who met when they were both in grad school. They have a love for the Norse sagas, and decided to create a podcast about a subset of them as a way to stay in touch with each other. Originally they thought that they would spend an hour or so discussing a saga and then pass judgement on it at a trial (hence the “thing” in the podcast’s name). It has turned out that they fail miserably at getting through any particular saga quickly, so a single saga will often take many episodes over many weeks, with another episode just for the judgments. In fact their very first episode was split into 3 parts, and I think only one saga was completed in a single episode. But the length of each episode is well worth it.

They take a lighthearted approach, sharing jokes back and forth, and making LOTS of modern cultural references (e.g Princess Bride, Star Wars, the Vikings TV show, etc.). This keeps the tone light and the digressions interesting. After a few episodes I felt like I knew these guys personally. They describe what happens in a saga (or a portion thereof, typically), and then talk about its significance to the overall story, to other sagas, and even to other Medieval literature. They often contrast what the author is claiming happened versus what they know from studying other contemporaneous texts, always keeping in mind that the Icelandic sagas were written WELL after the fact.

They are currently going through Egil’s Saga. They are 8 episodes in, and are guessing it will take more than twice that to finish. When they read portions of the actual saga (typically in translation, but sometimes in Old Norse) they come up with interesting voices for the different characters, and do a credible job of using the same voice for the same character from episode to episode.This helps keep the podcasts entertaining, and leads to more banter and teasing between the two of them.

When they “judge” a saga, they have several criteria that they use:

They have come up with several unique measurements over the years, several based on the first saga they reviewed, Hrafnkel’s Saga. Things like length and body count are both compared with that saga to give some perspective on the different themes the different sagas take. Some are less bloody than others, for example, so they want to provide an easy indication of just how blood filled a saga was for it’s length.

In addition to reviewing sagas, they also have created many “Saga Briefs”, in which they spend an episode talking about things related to Medieval Iceland that aren’t directly from a saga. Two relatively recent ones were about the recent “female viking warrior” find and Medieval archery. In both they interviewed experts in the field and presented scholarly findings, rather than click-bait headlines. There have also been several relating to the Vikings TV show, and comparing what is happening there with both the sagas and other historical accounts. They have gotten much better in the past year or so about posting new podcasts more regularly, so you can look forward to new content every couple of weeks, or so.

If you are at all interested in Norse history or saga literature, then you will enjoy listening to these podcasts. While it isn’t necessary to start at the beginning, I would recommend at least starting at the beginning of a particular saga, rather than partway through. Even though they provide a summary of what went before at the start of each podcast, they usually only cover the one just before, not a recap from the beginning of the saga.

P.S. It was this podcast that inspired me to use goði as my County equivalent.