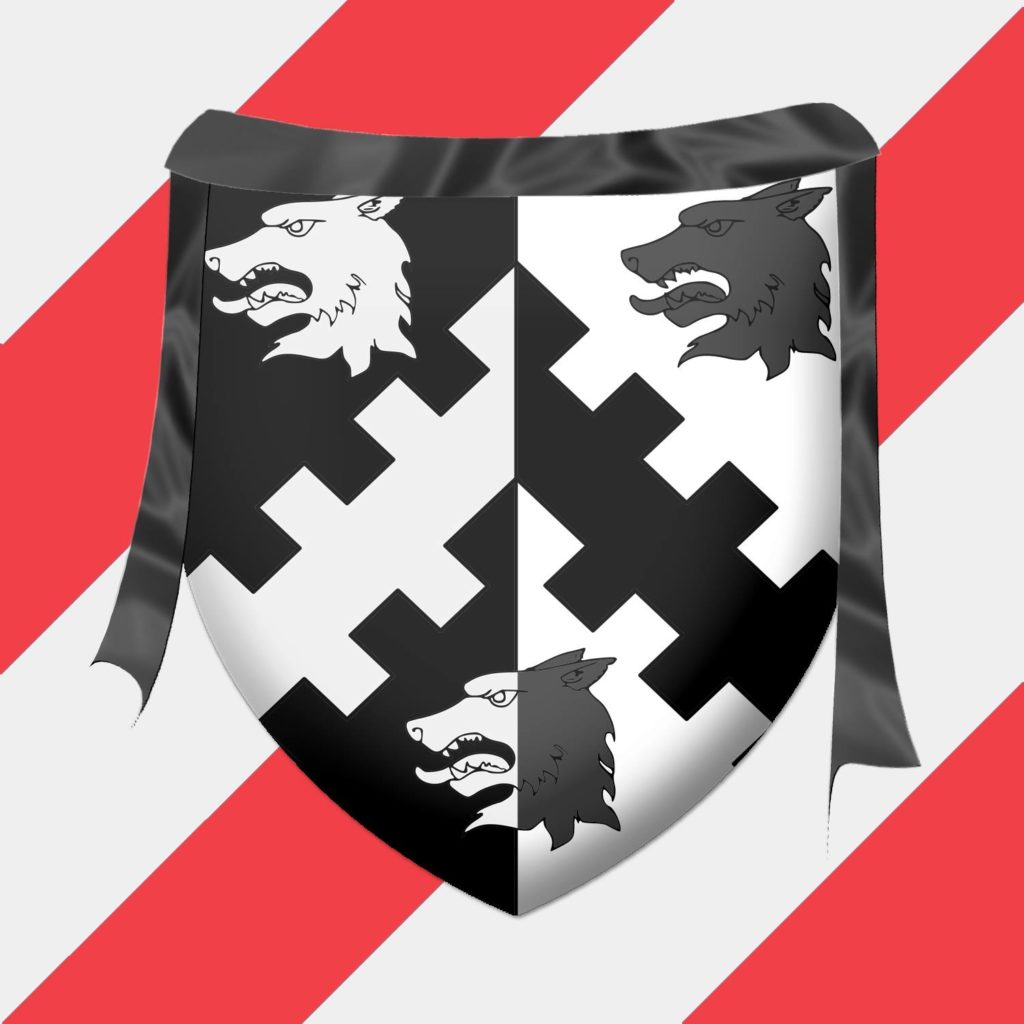 Because Rendell was known to many in the Calontir archery community who traveled to Pennsic, the Falcon Banner is re-printing this “In Memoriam” from the Æthelmearc Gazette 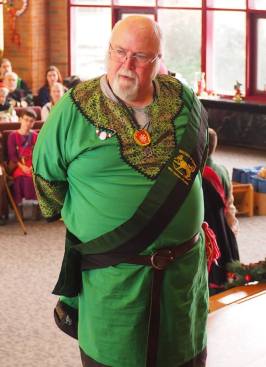 On Saturday, September 28, THLord Cynwulf Rendell was too ill to travel to the Harvest Raid event in the Shire of Heronter, where he was scheduled to be elevated to the Order of the Pelican for his work in the thrown weapons and archery communities. So that morning King Timothy, together with a group of Rendell’s friends and peers, instead drove over an hour to Rendell’s home in the Barony of the Rhydderich Hael to bestow the Pelican upon him there, and also to induct Rendell’s lady, Eleanore Godwin, into the Order of the Millrind. There were tears and laughter and many words of praise for Rendell’s kindness, generosity, and service.

Dear friends, family, and supporters of our house. Last evening at 4:30pm Master Cynwulf Rendell passed on from this world to the next. His day was filled with words from his friends and gifts from his loved ones. It was a day of a house full of people that have supported the love of his art and strength and goodness of his character, and in turn he showed his devotion to the group. We thank you for making his final day so special.

Master Rendell and his family joined the SCA in the Shire of Heronter in 1994. He was immediately interested in archery and thrown weapons, becoming a marshal in short order, eventually taking on the role of Kingdom Thrown Weapons Marshal. He traveled around the Kingdom, organizing and running lines and training

Rendell served as the Heronter archery marshal from the time he joined us until they moved. Every week he brought all the targets and loaner equipment for a half dozen people. He spent so much time teaching during the practice that he had to come early to get in a round for himself. He and his lady and his son also helped during the reigns of Cygnus and Dorinda. They took some time off, but for the last 5 or so years, he came back to run archery at Harvest Raid. Each year he created unique and fun shoots for people of all skill levels. He worked to train others, and even agreed to serve as our archery marshal, but his health did not allow it. We will miss him very much. 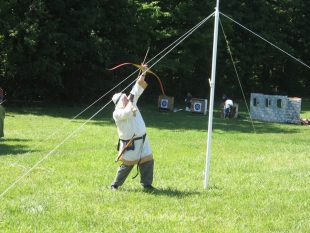 I only met Rendell a few years ago; he and his lady wife joined about the time I took my extended break. When Siobhan and I came back to the SCA in 2016, our first event was Baronial Champs. Rendell was running thrown weapons and archery. He was very kind to Siobhan’s child, showing them how to hold the axe and where to stand to throw it. I was impressed with his patience. The following week we all went off to archery, and once again Rendell was patient with me and showed me how to get most of the arrows down range and not into my feet. Time passed, I got better and Rendell began to teach me how to make targets, how to run a range, how to inspect bows, and how to marshal. I think he was as proud as I was surprised when I was awarded my Golden Alce. Every milestone reached by any of his Hounds made him as proud as if we were all his children. It’s why we all called him Papa Hound.

When he was Kingdom Thrown Weapons Marshall almost 20 years ago, he traveled everywhere and was pivotal in the growth of thrown weapons at that time.

We often sat and shared information about our ranges and frequently this developed into new and fun ranges. He loved to challenge himself and others. 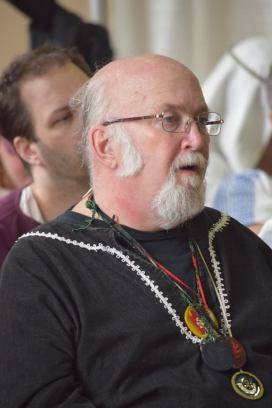 My heart is torn in half. He was a kind and gentle man who was a great teacher, a role model for us all. He will be sorely missed. We have lost a great light, so we must shine all the brighter ….all of us…Together. I see where some now doubt that they have a place. Everyone in the Hael has a place. Do not doubt. Do not let the weasels overcome the promise that He saw in each and every one of us (yes Rendell, you were right). I know we can strive to fulfill those beliefs…Together.

Fair skies, Rendell. Soft winds to you and a stout string to your bow.

I remember his fun side. At one event we were sitting together and decided that Lady Simonetta’s stuffed rabbit needed a bow. We set about looking for materials and came up with a wooden coffee stir stick and a piece of string. We next needed to see if the bow would actually work, so we broke some toothpicks in half and tried to shoot them, at objects around the hall. Our wives found us doing this and told us we were not allowed to sit together anymore (especially during court). The stuffed rabbit still carries that bow, if I’m not mistaken.

It was my greater pleasure to benefit from his sage and ever humorous instruction in thrown weapons. This goes back to about 2009. Not only were his tips clear and true and simple, but his declaration to my sister to “just throw like you are aiming at your husband” has given us many belly laughs!

Due to his health the elevation was not able to happen at Harvest Raid and His Majesty along with a small entourage went to his house. When they came back one of them brought me a small beanie baby that Rendell wanted to give to my daughter. Sadly she was not with me since she was on her way back from Myrtle Beach with my parents and by the time she got home Sunday evening he had already passed. I wanted so bad to take a photo of her with it and send it to him as thanks. His last thoughts were of others, just like he was in life.” 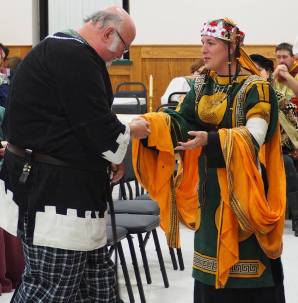 Mistress Sadira spoke at Rendell’s Pelican ceremony on behalf of the Order of the Laurel, She graciously shared her words:

I am Sadira bint Wassouf, Mistress of the Laurel and Pelican, 6th Jewel of Æthelmearc, Second and Eighth Baroness of Thescorre. But today I would speak about Rendell for the Laurels. Sort of…

Rendell is unquestionably an artist. Martial arts are called arts for a reason. The flight of an arrow or a throwing knife is art in motion with a satisfying THUNK at the end. And when Rendell shoots, there is joy in his eyes. Whether designing ranges and targets, whether shooting or watching others, the passion of youth has never left him. And the true heart of art is passion.

But where does art end and service begin?

I suspect that Rendell was born with service in his very soul. Some people do service, but Rendell is service. I only became fully aware of his service when I stepped up as Baroness the second time. Now, if you are ever stupid enough (I mean, lucky enough) to become a landed Baron or Baroness, you need to know that about 45 seconds after you don the coronet, a “thing” happens. The “thing” makes you want to say “REALLY??? NOW???”

But this time the “thing” impacted archery and even with all of my skills as a counselor and teacher, I could not even figure out what the “thing” was – much less untangle it. Archery in Thescorre was at a complete impasse.

Finally, in desperation I crashed a meeting of Kingdom archery marshals at a winter event and explained the “thing” as best I could. I asked bluntly, “What can you do for me?”

Without hesitation, Rendell said, “I will help you.” Now, we hear these words all the time, but something in his tone made me believe.

That spring, Rendell showed up at the first archery practice, and he kept coming back for months and months.

We have only one truly precious possession in this life and that is TIME. Rendell showered us with his time, poured out with reckless abandon, with patience and joy in his eyes.

So where does service end and art begin?

It is an art to bring people together, to teach your art and see the joy of a child bloom in their eyes – then set them free to pass it on.

In Rendell art and service meld seamlessly and when that happens, the Great Dream we all hope to live in the SCA comes true.

My peer? I suspect we would all have to work very hard to become his peer. 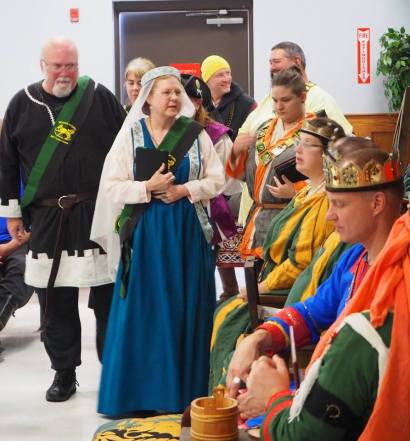 In addition to the Pelican, Master Rendell was recognized with many Kingdom and Baronial awards for excellence and skill, including the White Horn for thrown weapons, the Scarlet Guard for archery, the Cornelian for courtesy, and awards from three baronies in recognition of his service including to groups in which he did not live.

Ralph Spencer was a copy machine repairman. He is survived by his wife, TH Lady Eleanore Godwin, and his son, Lord Gawin Hawkseye. No funeral services will be held; TH Lady ELeanore announced there will be a Celebration of Life for Rendell on November 10 from 1:00pm to 4:00pm at the Wrights Corners Firehall, 4043 Lake Avenue, Lockport, NY 14094. Doors open at 12:30pm for set up. Pastor Tom will speak at 1:15pm and there will be an open mic after for folks to share stories, laughs, and love.
Food will be pot luck, no kitchen use, just the sink. Bring your own dishes.

Donations may be made in Ralph’s memory to the Roger Tory Peterson Institute of Natural History, 311 Citrus Street, Jamestown, NY 14701.