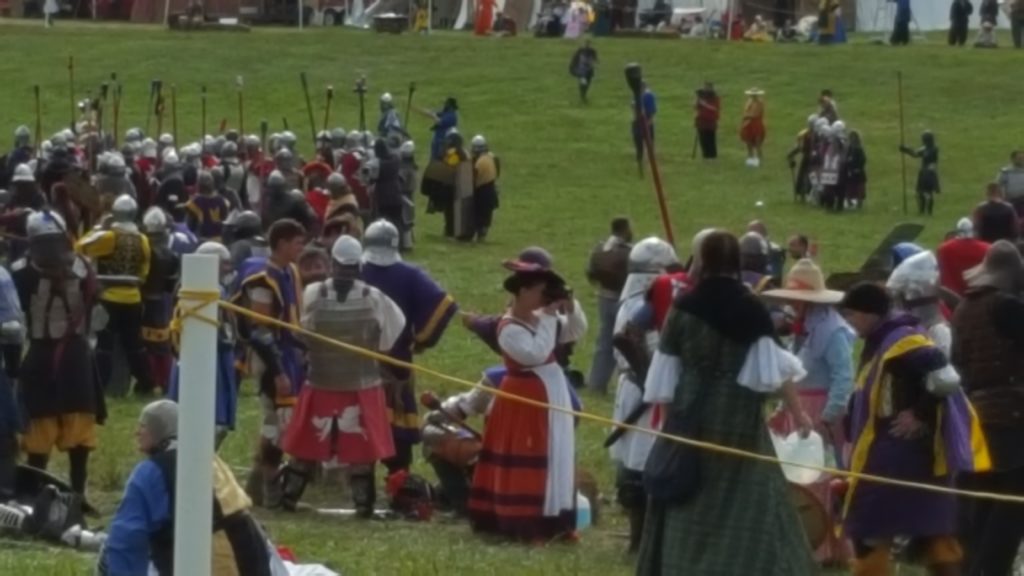 The 45th Pennsic War was marked by hotter than usual temperatures, more uneven than usual sides, and the usual amount of fun, punctuated by shopping, learning, fighting, singing and some silliness.

Calontir, led  by Their Most Illustrious Majesties, King Logan and Queen Ylva, allied themselves and our kingdom with the Kingdom of Ealdormere, ruled fairly and firmly by Their Most Feran Majesties, King Nigel and Queen Adrielle. Nigel and Adrielle, in Their wisdom, allied themselves with the formidable Kingdom of The East. For one reason or another, many kingdoms allied with The East, and the sides seemed a bit lopsided. This unevenness resulted in a target-rich environment for the forces of The Middle, and resounding victories for The East.

But we are Calontir, and the victories and defeats of foreign rulers and their petty squabbles mean little to us.

As always, Calontir mustered under the Royal Pavilion. This year, it was brand new and vibrant, having recently been destroyed in the Gulf Wars storm, and remade by the talented, hard-working Mistress Rhianwen.

King Logan and Queen Ylva led the Calon host to the battlefield for battles pitting hundreds against hundreds on Monday, Tuesday, Thursday and Friday. Wednesday was a “day off” in which the battlefield was used for grand tournaments.  Sir Malachi von Uri was the general for the week. His strong leadership and knowledge of tactics was matched only by his good cheer.

On Monday, a battlefield court was held by Their Majesties, and Lady Emma Ness was inducted into the Order of the Iren Huscarl! Her Ladyship was presented with a fine axe and lovely hood by her knight and his lady, Duke Dongal and Qadiya Catalina. Cheers of “Hus! Hus! Hus!” filled the air!

The water bearers, led by Qadiya Catalina, kept the army hydrated with water, Gatorade, pickles, oranges and their usual conviviality. Among the water bearers, Lady Katherine d’Arles, Lady Kolfinna Halvgrimsdottir, Lady Cincinnata, and Lady Cecilia could always be counted on to help a combatant out with a drink and a smile.

Lady Cecilia, His Lordship Pepin and Lord Melchor all attended a textile block printing demo. Lady Cecilia, in particular, came away from the demo with an increased enthusiasm, inspired to block print all the things!

The temperatures were high for Pennsic, getting into the 90s during the day with a heat index of around 100 degrees at certain times. Anyone who has attended Pennsic in the past will recall that this is a bit hot, even for August in that part of the world. However, it did mean we were never shivering in our cots at night. 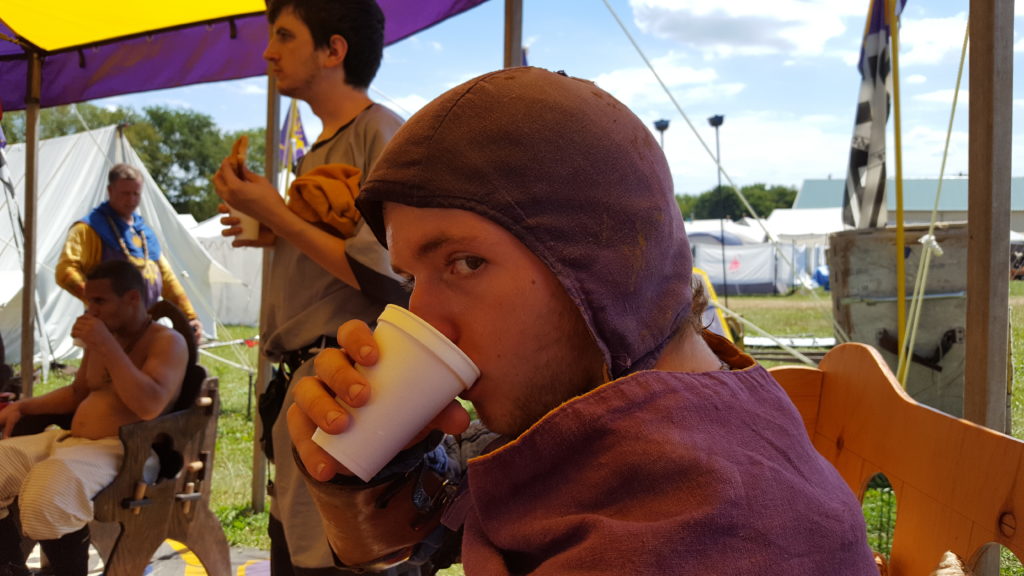 nd, as the sun went down, the temperatures did drop to something more tolerable, and Calontiri sought out the fun to be had. Of course, there was singing under the Royal Pavilion every evening. Roving party amoebas wandered around site and into the bog on several occasions. The usual adult parties could be found in the tree-lined areas around the lake, but those stories are not mine to tell.

Thursday was an eventful day in the Calontir encampment. After the battles, as is custom, Sir Malachi chose a fighter to carry the War Banner the next day. He spoke of the valor of a certain Huscarl, and offered the banner to His Lordship Gavin O’Shannon.  As Gavin took the banner, Duke Dongal stood and  begged a boon of Their Majesties and asked that his squire, the very same Gavin, be elevated into the Order of Chivalry!

And, to top off court, Mistress Fionnuala inghean Fhearghuis was granted permission to approach Their Majesties. She came with a request. She knew of a person of high merit; a lady of great knowledge, certain grace and considerable skill. She begged a boon, and it was granted. And, Her Ladyship Sibilla Swain was invited into the Order of the Laurel.

After court, industrious Calontiri set to preparing for our traditional party. The OAFS planned a great game, and Her Ladyship Sibilla made ready a sumptuous buffet of party food. 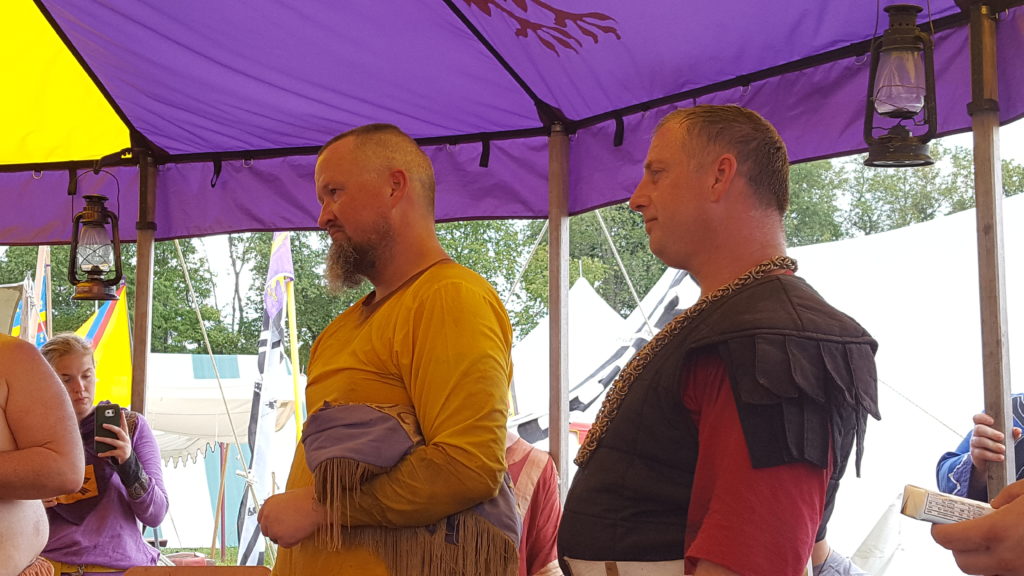 Played with rattan axes and a ball of dubious construct (was there really an apple in the middle of that duct tape?), the field included “the lower 48 states, but not including private encampments.” Three players on each side used the flat sides of the axes to whack the ball along the ground between goal posts. There was also a penalty box. His Lordship Pepin spent a good bit of time in the box, but he insists he was unfairly judged to be body checking. When she arrived Queen Adrielle eagerly took part in the sport, while King Nigel chose to remain an ardent fan.

Her Ladyship Sibilla, duly gobsmacked by the boon begged so recently, pulled herself together and led her team of cooks. Lady Cecilia, Mistress Fionuala, and Countess Gwen  formed the team. Lord Melchor and His Lordship Pepin provided needed assistance in moving tables. Meatballs, roasted chicken, many delicious cheeses, berries in cream, and many, many delights filled the table. Her Ladyship Emma arranged for adult beverages to be served as well as sekanjabin. No one went away hungry or thirsty.

The renowned music ensemble, Wolgemut, came into camp during our party and delighted the crowd with many songs! They stayed for a bit after playing to partake of the food and drink and catch up with old friends. Wolgemut has a long history of being a friend to Calontir, and was recently made an Iren Feran! The leader of Wolgemut, Misha, proudly showed off his medallion! 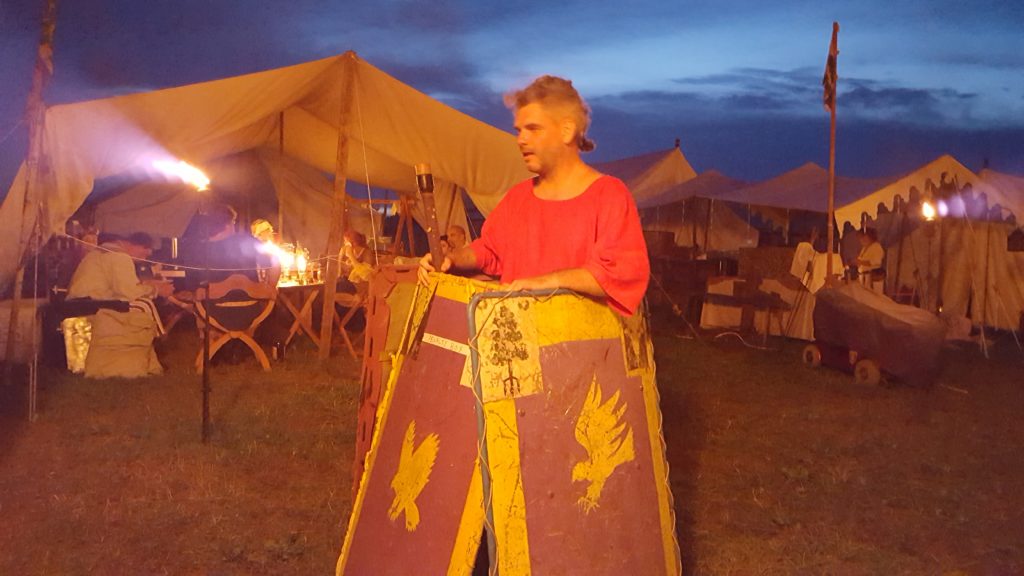 And the singing and game playing went on into the night. 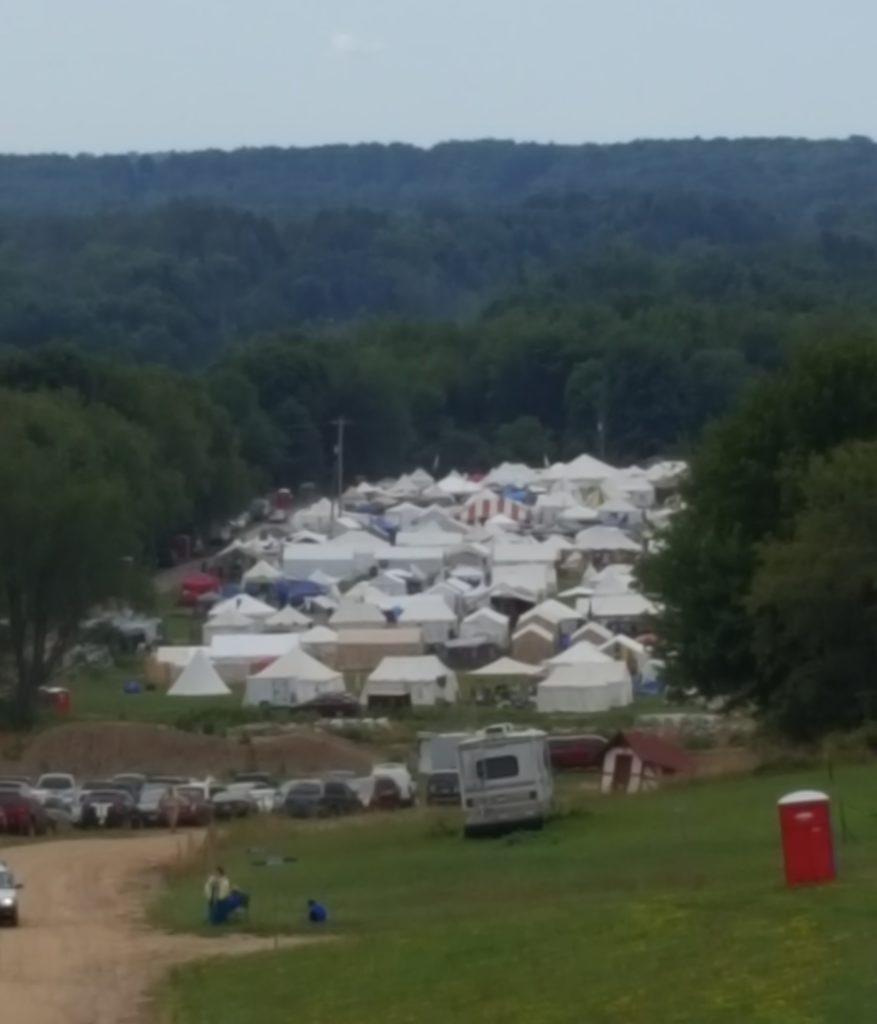 Friday, our last full day at Pennsic, was warm and full of fighting, last-minute shopping and merriment. Not a kingdom for complacency, Calontir squeezed every last bit of fun out of Pennsic. Partying under the Royal Pavilion lasted into the wee hours, as one-by-one war-goers drifted off to their tents in exhaustion, knowing that the morning light meant packing and going home. But, oh, it was worth it.