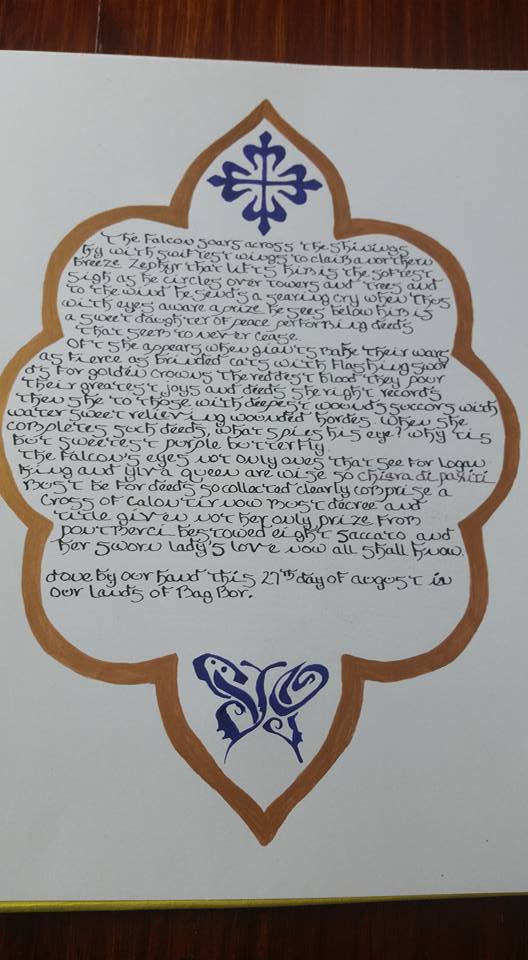 Chiara’s persona is of a 15th-century Florentine, hence I looked to Lorenzo di Medici for inspiration. He was not only the ruler of Florence from 1469 to 1492, he was also a patron of the arts and a poet himself. I wrote the text in ottava rima style, which originated in Italy and was used for heroic poems. It uses iambic pentameter and ABABABCC rhyming scheme. Medici used this style in some of his works, and I also used some of his other poetry as inspiration for some of the word choices.

I also included notes in parentheses when appropriate to explain certain word choices.

Oft she appears when giants make their wars
(she is a fan of the New York Giants)
as fierce as brinded cats with flashing swords
(also a fan of the K-State Wildcats, and Shakespeare uses “brinded cats” in Macbeth as a reference to wild cats)
for golden crowns the reddest blood they pour
their greatest joys and deeds she right records
(this is intended to cover both her job as listmistress and scroll text writing)
then she to those with deepest wounds succors
with water sweet relieving wounded hordes.
When she completes such deeds, what spies his eye?
why tis but sweetest purple butterfly
(her device includes a purple butterfly)

The falcon’s eyes not only ones that see
for Logan king and Ylva queen are wise
so Chiara di Paxiti must be
for deeds so collected clearly comprise
a Cross of Calontir now must decree
and title given not her only prize
from Pontmerci bestowed ten saccato
and her sworn lady’s love now all shall know
(Issabell wanted to make sure that Chiara got land from Pontmerci, a saccato is a Tuscan unit of area that is about 1.389 acres.)