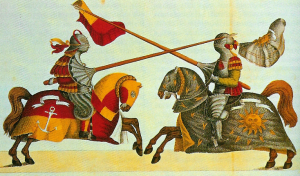 His Grace Sir Donngal Erikson and Her Excellency Countess Catalina de Arazuri are the newest Heirs to the Crown of Calontir.

Their Majesties had declared each bout for the tournament would be best two out of three, with all byes also being fought tow out of three.

Many thanks to Meisterin Brigida von München for her play-by-play on the Book of Faces.