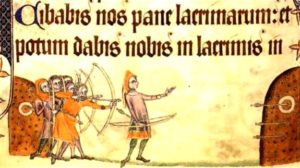 The Kingdom Earl Marshall Halvgrimr riddari announced at this past Crown Tournament that Calontir will be adopting the Society standards for shafted combat archery, with possibly a few variations.

Halvgrimr admonished all marshalls to familiarize themselves with the Society standards as they take immediate force in Calontir Combat Archery.

Halgrimr also acknowledged the dedication and work of THL John Bowyer in accomplishing this goal.