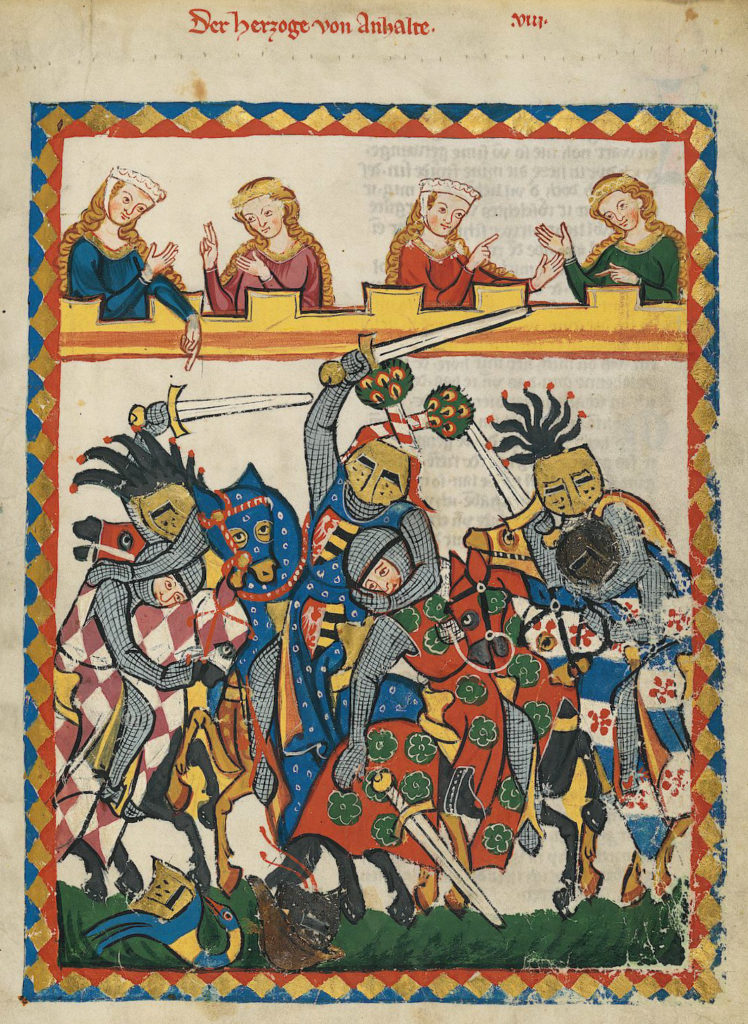 Several things are going on on Facebook to help Calontir folks get through the current crisis. The Falcon Banner and The Calontiri Wiki will be making available those that are shareable outside of Facebook.

ARIEL AND I WIPE OUT THE EAST – ALMOST

It was the woods battle at Pennsic XV. I had injured my knees, again, and thought that I would sit the battle out. The Calon army was very new then and wearing the tabards was a great joy. Not that it isn’t now, only then it was still a new joy.

As I was watching the army march off to battle, singing, while I stood there on my crutches, I was greatly inspired. Grabbing the few non-fighters in camp I then had my knee wrapped and myself armored. Rounding up three other fighters that were back in camp for various reasons we took off after the army. They were Lady Megan O’Reilly, Lord Tom the German, and a third I can’t remember.

The four of us moved slowly and entered the woods well after the gun. (I was walking on a busted knee, which I had to have replaced right after that war.) We had many small engagements with small groups of Easterners and did quite well, until our fourth or fifth engagement where we were all killed. The other three went on to resurrection point as I was still very slow and they could move at normal speed.

Upon reaching the resurrection point I found the only fellow Calontiri was a young fighter named Ariel. She was very young then and didn’t have a lot of war experience. What her inexperienced eyes saw was the old war dog of Pavel standing ready to once more move into battle. She asked me if she could resurrect with me. Flattered, I, of course, said “You betcha!”

We moved out in our war tabards. A large hulking brute of an old warrior and a young, just blooded, warrior. We met a couple of small one and two fighter Eastern fighter groups that we quickly dispatched. Arial showed much skill in these small encounters, raising my assessment of her skill with each one.

Then we saw a column of about 120 Eastern troops. Sensing their fear, I yelled “CHARGE!” and waddled at the foe’s column. Ariel, being young and fast, quickly got in front of me with her shield. (I was fighting pole arm, this was before Syr Richard cut my hand off and the doctors put it back on.)

We hit the column almost dead center. It was about four fighters wide. Arial jumped the ditch and smashed into the two fighters in front of her, compressing their ranks. I jumped across the shallow ditch and landed right behind her. There was chaos.

“Calontir is attacking our flank!”

I got three with my first swings! Ariel was swinging – a kill with every blow! We cleared a circle of dead within weapon’s reach! The foe knew they were in for a quick trip to the resurrection point!

Then we heard the fatal words….

“There are only two of them.”

There was a long, quiet pause. Then, the world fell on us. *Sigh*

Well, that’s the story of Ariel and myself almost wiping out the Eastern army.