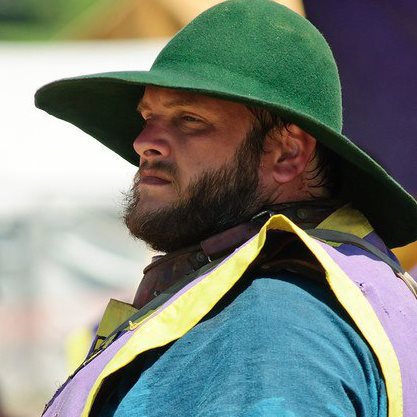 Lord Cuilén Kirk of Moray passed from this world this week after battling colon cancer.

He was a brother Fyrd, both Iren and Boga, as well as companion of both the Torse and Leather Mallet.

Best story is Him, me and Mama Z all went to gulf wars together. He was new to brewing and had not sealed his kegs right. The vibrations caused a leak and we were breathing in the fumes from the excess pressure and shaking for 10 hours. Almost like a mist of mead in the van. Everyone was a bit giddy. – from Jeff Angus

Calontir used to use gulf tubes with tennis balls on the end for combat archery. Needless to say they didn’t go near as far or fast as other kingdoms arrows. Which of course meant many shied away from missile combat. Not so Cuillen. He embraced the limitations. And not as far or fast is still better than nothing. Trimaris in particular seemed to have endless numbers of crossbows and was always opposite us at the Gulf War ravine battle. Cuillen understood his limitations. He and our few other archers were patient, but when they struck it was always to take out the other sides best spears at a critical time. This of course inspired the crossbows to focus on him and not me. He largely ignored their crossbows as to far away too shoot effectively. But even so he still kept them from getting too close. For this and so many other reasons I will miss him dearly. – Daniel Berg

Nobody mundanely or in the SCA could make a better Blueberry mead.

A service for Cuilén (mka Christopher Roehr) will be held at the American legion post on Saturday July 17 at 1p.m. The address is 9655 Midland Blvd., Overland, MO 63114.