County scroll for HE Sir Duncan Bruce of Logan, done in the Reign of Bataciqan-nu Ko’un Ashir and Ashland de Mumford 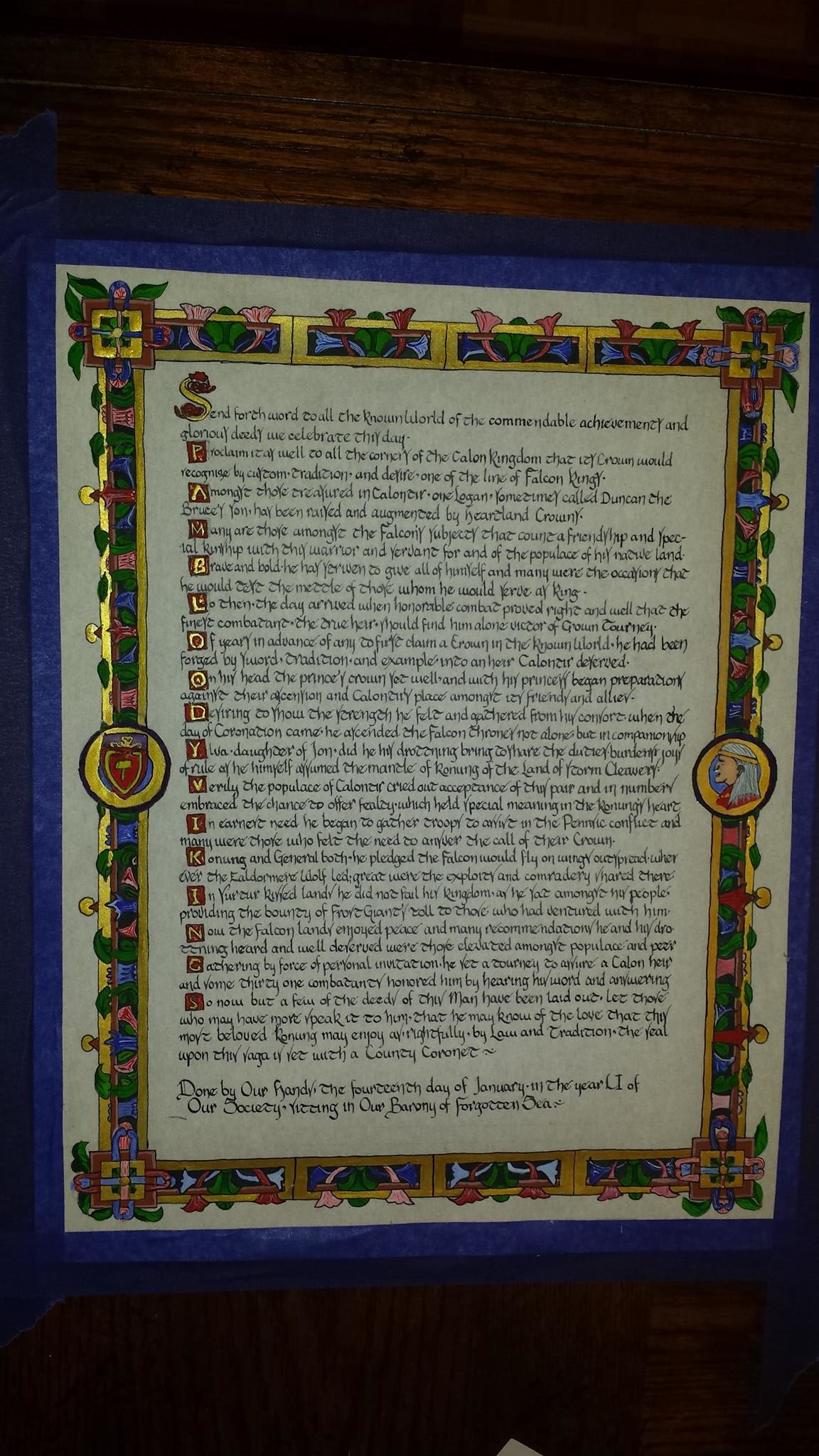 SEND forth word to all the Known World of the commendable achievements and glorious deeds we celebrate this day.
PROCLAIM it as well to all the corners of the Calon Kingdom that its Crown would recognize by custom tradition and desire one of the line of Falcon Kings.
AMONGST those treasured in Calontir, one Logan, sometimes called Duncan the Bruce’s son, has been raised and augmented by Heartland Crowns.
MANY are those amongst the Falcon’s subjects that count a friendship and special kinship with this warrior and servant for and of the populace of his native lands.
BRAVE and Bold he has striven to give all of himself and many were the occasions that he would test the mettle of those who he would serve as King.
LO then, the day arrived when honorable combat proved right and well that the finest combatant, the true heir, should find him alone victor of Crown Tourney.
OF years in advance of any to first claim a Crown in the Known World, he had been forged by sword, tradition and example into an heir Calontir deserved.
ON his head the prince’s crown set well and with his princess he began preparations against their ascension and Calontir’s place amongst its friends and allies.
DESIRING to show the strength he felt and gathered from his consort, when the Day of Coronation came, he ascended to the Falcon thrones not alone but in companionship.
YLVA, daughter of Jon, did he his drottning bring to share the duties, burdens and joys of rule as he himself assumed the mantle of Konung of the Land of Storm Cleavers.
VERILY the populace of Calontir cried out acceptance of this pair and in great numbers embraced the chance to offer fealty which held a special meaning in the Konung’s heart.
IN earnest need he began to gather troops to assist in the Pennsic conflict and many were those who felt the need to answer the call of their Crown.
KONUNG and General both, he pledged the Falcon would fly, on wings outspread, wherever the Ealdormere Wolf lead and great were the exploits and comradery shared by these Kingdoms.
IN Surtur kissed lands he did not fail his Kingdom, as he sat amongst his people, providing the bounty of Frost Giant’s toil to those who had ventured forth along with him.
NOW the Falcon lands enjoyed peace and many were the recommendations he and his drottning heard and well deserved were those elevated amongst the populace and peerage.
GATHERING by force of personal invitation, he also set a tourney to assure a Calon heir and some thirty one combatants honored him by hearing his word and answering that call.
SO now but a few of the deeds of this Man have been laid out, let those who may have more speak it to him, that he may know of the love that this most Beloved Konung may enjoy as, rightfully, by Law and Tradition, the seal upon this saga is set with a County Coronet.