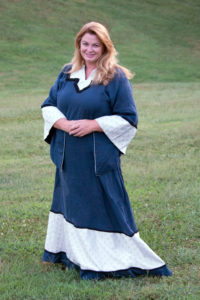 War was calling. Our enemies were massing far to the east, so our mighty Konung, Duncan Bruce of Logan, mustered our warriors for the long march to that faraway kingdom. Many battles were fought in the great Pennsic War, but this is the tale of one particular battle—a battle for a bridge.

The army of Artemisia had twice our number, nay, tenfold at least, and the only thing holding them back was the churning water of the rain-swollen river. That endless horde, eager to storm across the bridge and slaughter everything in its path, was a chilling sight, but the Calontiri knew no fear. Logan strode to the bridge and hurled a spear toward those shining Artemisian helms with a bellow of “Odin owns you all!”

With a shield-shattering roar, the Calon host charged onto the bridge. The Artemisians could not withstand the Calontiri onslaught. Slowly at first, then with greater speed, the Artemisians fell back as our warriors fought their way across the bridge.

“Arrow!” someone shouted. First one dark missile, then another, arced through the sky then landed harmlessly on upheld Calontiri shields. Logan laughed. “You’ll need more than pointy sticks to send me to Valhalla!” he roared with a deadly swing of his war hammer.

The Artemisians fell back, and back, until the Calon host had nearly reached the far side of the river. “Arrow!” someone called again. This time the sky darkened and the air hissed with dozens of missiles speeding toward the Calontiri. “Shields!” Logan bellowed. Our warriors hunkered beneath as the deadly rain beat against the wood and iron of the Calon shields. That, my friends, is the moment Artemisia charged.

Taken by surprise, the Calontiri fell, one after another joining their dying comrades in the growing river of Calon blood. The survivors retreated, defeat bitter on their tongues. As brave as our warriors are, they might have slunk home in shame, but Logan stood firm. “By Tyr, we will not be beaten!” he shouted. Drawing courage from their Konung’s strength, the Calon host surged forward once again.

And though many Calon warriors found their way to Valhalla, thanks to Logan’s courage, strength and will, no Artemisian crossed that bridge that day.