Other court news:
Youth combat is now an official sanctioned activity in Calontir.
Sir Duncan Eardstapa and Honorable Lady Gwendolyn Verch Morgaine were announced as the next Baronage of Three Rivers.
Mugs were given to 2 newcomers.
A boon was begged for Gyða glóra to join the Order of the Laurel.
A boon was begged for Titus Decimius Alexander (Xandre) to join the Order of Chivalry. 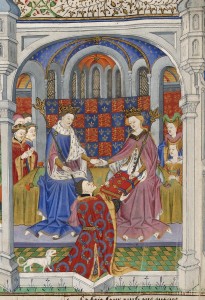