Count and Countess Scroll for Their Excellencies Matsunaga and Elena

Presented by Logan kunung and Ylva drottning at Coronation July 9, AS 51 (2016)

One of the many highlights of Summer Coronation, held July 9, 2016 in the Barony of Coeur d’Ennui, was the investiture of Matsunaga and Elena as Count and Countess. In commemoration of their Reign, both received their County coronets from the hands of their Heirs, Logan and Ylva. In addition, scrolls with the words of the new Crown were presented. Below are the texts of those scrolls, along with photos. Truly, both awards were wonders to behold.

Royal Scribe for Matsunaga and Elena, with gratitude and thanks for that great honor

Countess Scroll for Her Excellency Elena text was crafted by Mistress Ishmala bint Yuhannah. The scroll itself was created by Baroness Neathery of Safita.

Right trusty and well-beloved we greet you well.  It hath pleased the goodness of Almighty God of his infinite mercy and grace to deliver unto this glorious kingdom this great lady called Elena Moreno del Mar.  By the prowess and might of Matsunaga Kagetora she was made his consort and brought great joy and comfort to all the good and loving subjects of the realm.  This singular rose has mighty thorns and shielded her people on campaign when the winds turned tempest, she gave wise council to all, and kept her head at all times.

It is our great pleasure and inward desire that you continue to give comfort and consolation to our people.  We therefore by this letter advise you that you are made a countess of our realm and are given lands equal to our esteem for you.  We bequeath you the Wardenry of Royal Forests near the Crystal Mines where you may build a home with no less than four chimneys and may hunt and hawk at your pleasure.

We undoubtedly desire that you continue to give laud and praise to all subjects of our heart regardless of rank, and pray for the good health, prosperity, and continual preservation of our realm.

Given under our signet in the Barony of Coeur d’Ennui this 9th day of July, in the 50th year of our Society. 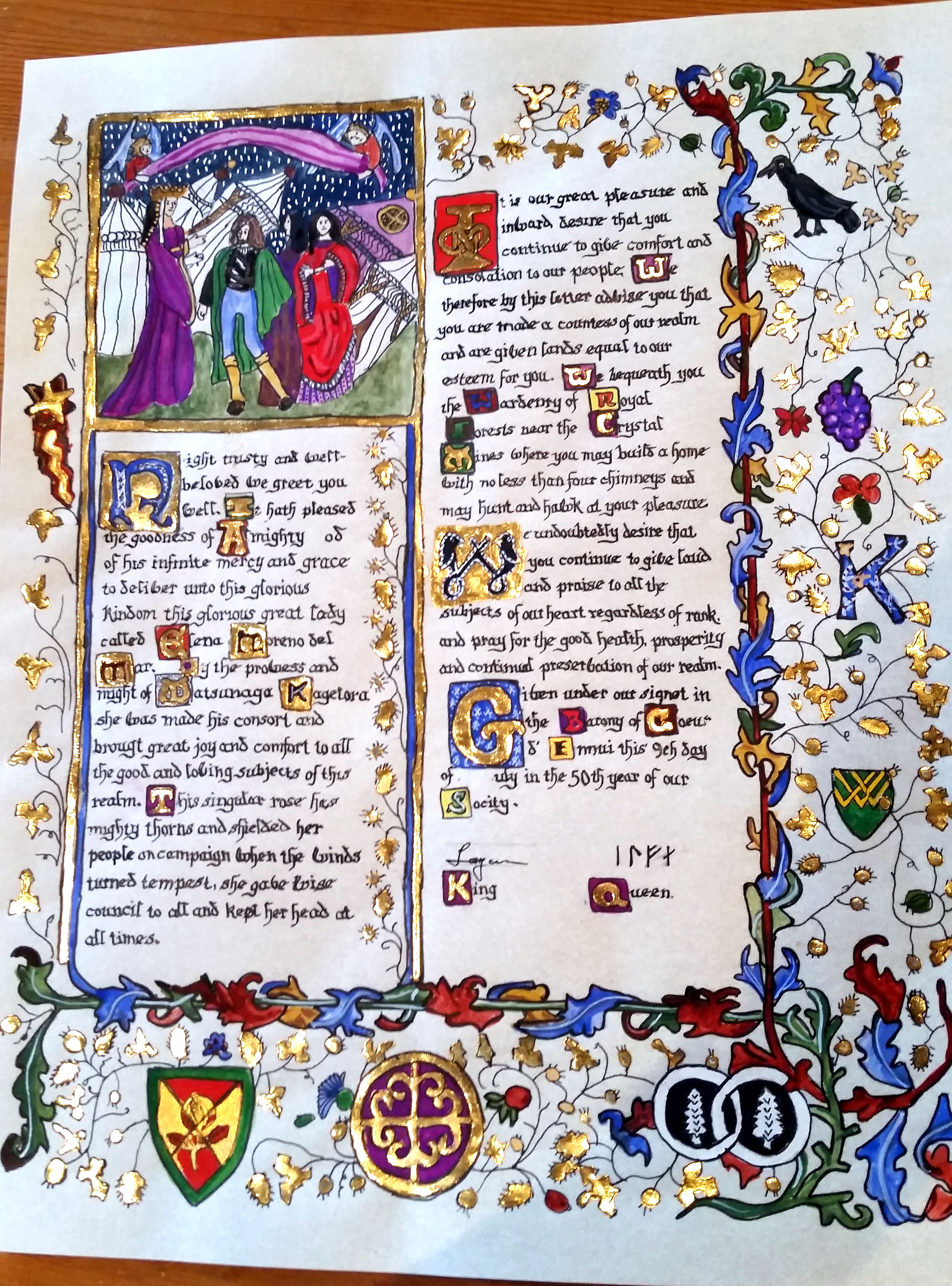 The County scroll for Matsunaga was created by Viscount Master Christopher Reuben Montoya, formerly of Atenvelt, now residing in Grimfells. The text was crafted by Master Andrixos.

Upon King, upon Kingdom

In calm, all recall tempest

From home of the dawn

To land entranced by sunsets

Path of pillow was king’s road

Brought from the Nippon

To Heartland and to Shogun

As Falcon soaring above

Soft breeze brought he to the land

And sought stronger storm to test

Foes all dispersed by his gust

Among folk he strode

Here he did gust as a king

Realm prepared for a new calm

By these words did Duncan Rex and Ylva Regina recognize Matsunaga Kagetori as a Count, and endow him with such rights and obligations accompanying such elevation, including a coronet of gold embattled.  Done on the ninth day of July in the Land of the Ring of Red Boars, in the fifty first year of the Society 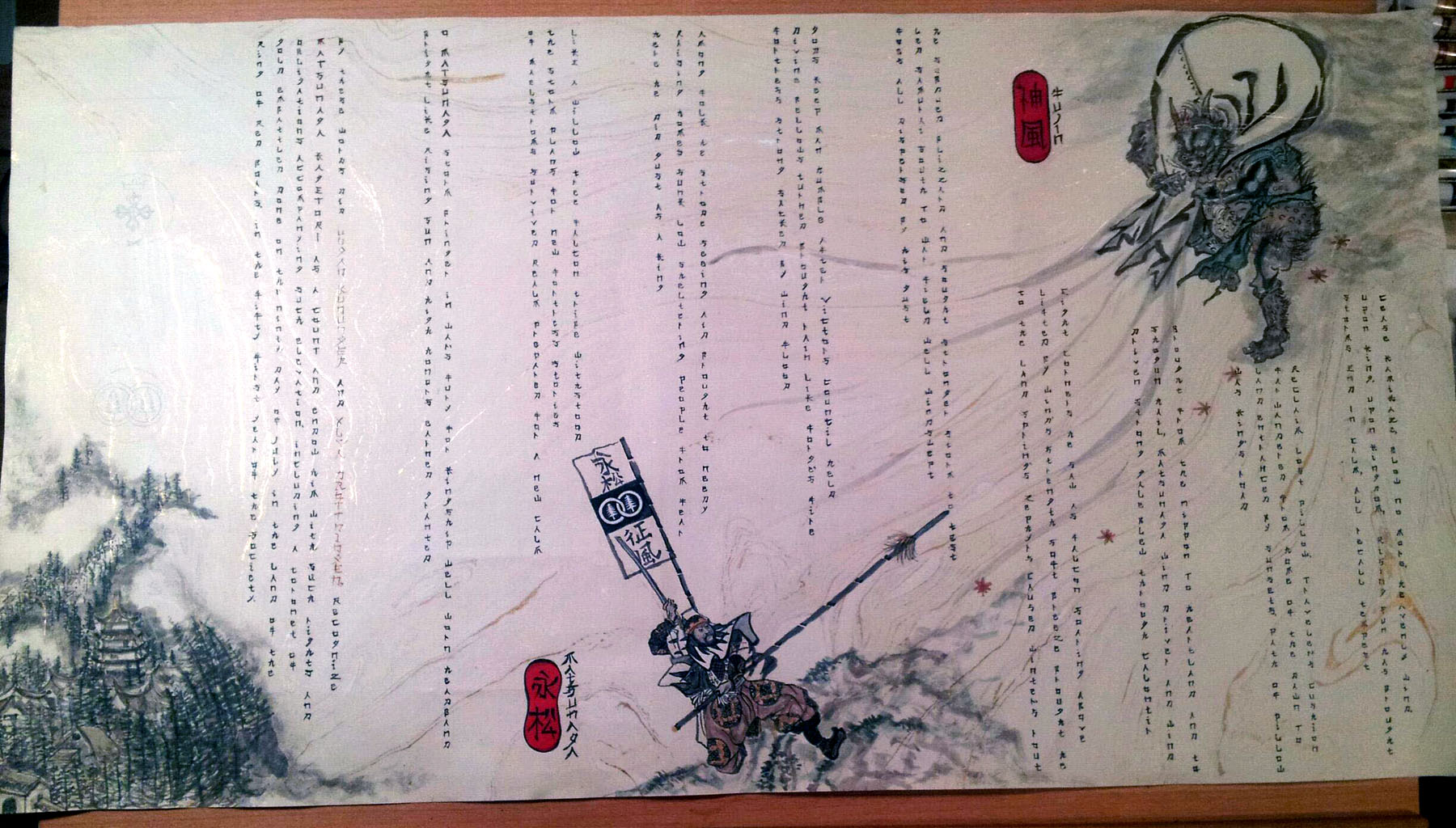 From the artist: It is written in the Japanese form of 10 Tankas; A 57577 syllable arrangement. The scroll itself is done with Sumi-e (black ink brush, and the painting depicts Fujin, the Japanese wind god, and Matsunaga fighting while His Excellency is protecting beloved Calontir behind him. The scroll text is in English, scribed in Japanese letter characters.  It is written in the “kanji” form (vertical columns/right to left) over Suminagashi (floating ink or marbled) paper. The Silk horizontal scroll frame is by Blue Heron Arts and mounting was done by the scribe.

Next from this author: H.L. Vels created an amazing addition to the Royal Scribe’s office, which was gifted to TRM and the RS Office at Coronation. Read ALL the details and see the amazing close-up photos in the next article. 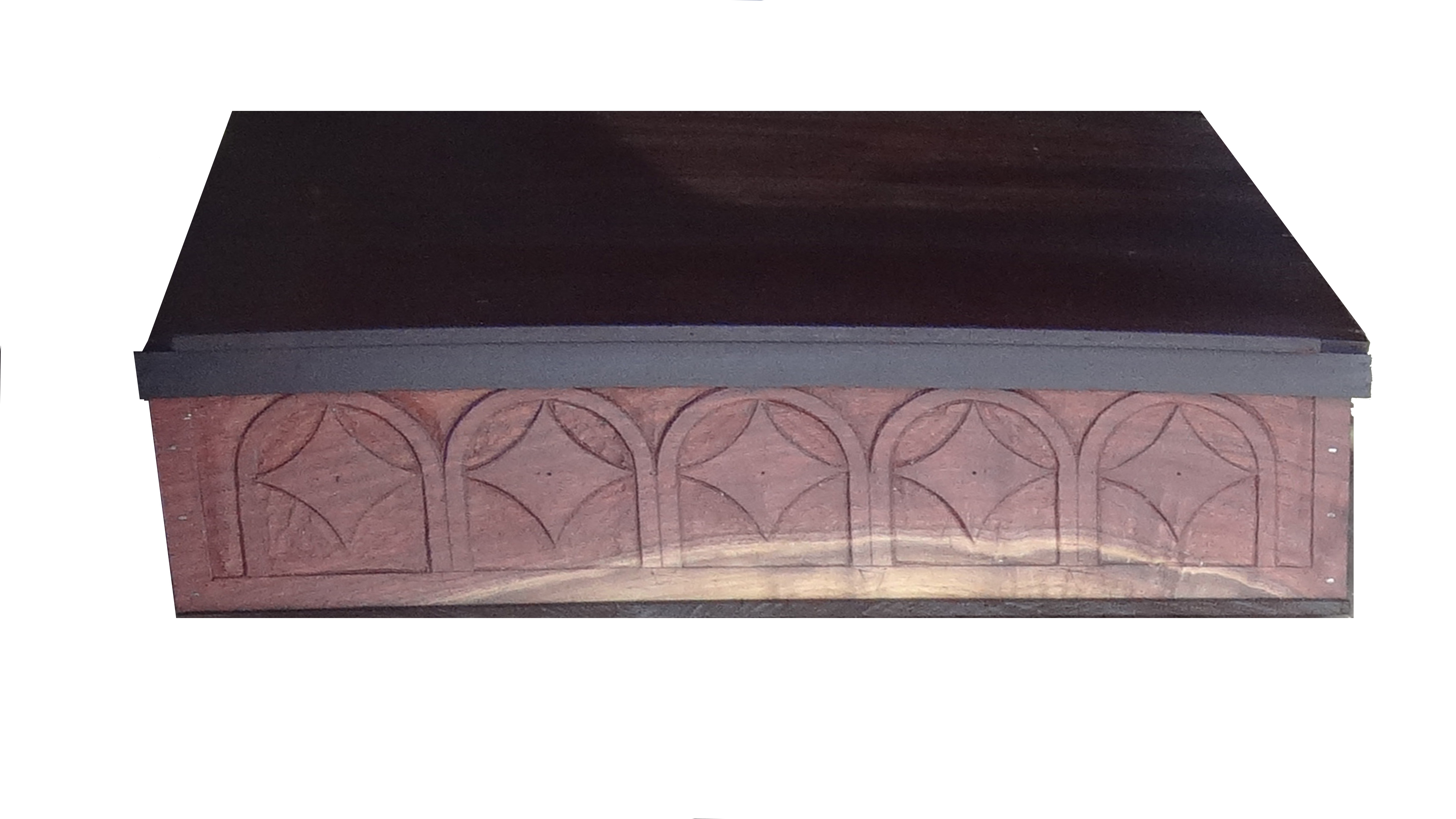 CORRECTION: This post has been corrected to reflect Mistress Ishmala bint Yuhannah as the author of the scroll text for Countess Elena. Also, Viscount Master Christopher originally hails from Atenveldt. The author deeply regrets these errors. 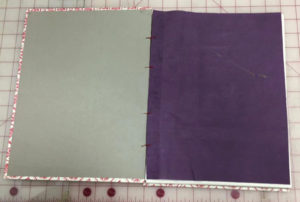 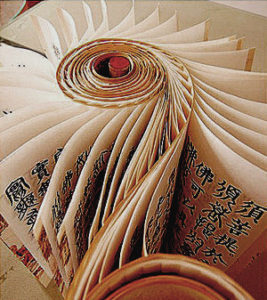 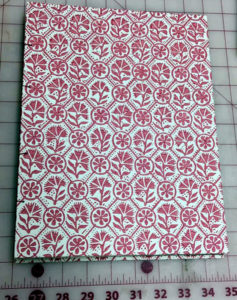 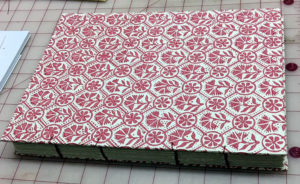 From the event stewards, via the CalonList:

Lords and Ladies of Calontir,

As the days grow short so too does the time until the Coronation of Their Royal Highnesses Anton and Isabeau, now just one month away.  As the event draws near we ask that you take another look at the event website:
https://sites.google.com/site/calontirwintercoronation2015/
We especially direct your attention to the Calon Steel page, which now has details for the Calon Steel portion of the Tournament of Fallen Crests:
https://sites.google.com/site/calontirwintercoronation2015/activities/calon-steel
And also to the list of crew chiefs:
https://sites.google.com/site/calontirwintercoronation2015/event-stewards/crew-chiefs
We welcome assistance in all areas, especially site setup, gate shifts, feast serving, and cleanup.  If you are interested in helping with any part of the event, please contact the appropriate crew chief.  Contact information for most crew chiefs can be found on the website.  For those that do not, or if you have any other questions, please contact us.
Your Servants,
Edward and Geva de Kent

At the final court of Their Majesties Martino and Ariel

At the Court of Their Majesties Agamemnon and Gwen

In place of Her Rose Ceremony, Her Majesty Ariel has requested I organize a roundtable discussion for ALL those people interested in discussing with Royal Peers what it is to sit the Falcon Thrones as King and Queen of our wonderful Kingdom.

Any Royal Peer interested in participating is welcome to attend. There will be light refreshments available.

On behalf of all Royal Peers, we look forward to seeing people there.

The contest is the best use of heraldry in one’s garb, whether it be personal heraldry, kingdom heraldry, badges, etc. This promises to be fun, and it’s a great way to get in touch with your own heraldry as your persona would have.

There is a need for judges and prizes. If you can contribute, please let Konstantia know via email! Also, please tell your local groups!

The contest is the best use of heraldry in one’s garb, whether it be personal heraldry, kingdom heraldry, badges, etc. This promises to be fun, and it’s a great way to get in touch with your own heraldry.

Rules are as follows:

1. The garment must be an SCA period piece of clothing. Great examples are surcotes, cotehardies, etc. There is no limit to time period or culture, as long as it is represented within the scope of the SCA’s area of study.

1.a: Heraldic decoration must be done in a way consistent with garment treatment as done in period.

2. The garment must have heraldry represented on it, whether that is a badge, personal heraldry, or kingdom heraldry. The heraldry does not have to be registered, however, it is encouraged.

4. Documentation is not required, but definitely encouraged. (and may score you bonus points!)

If you have questions, please feel free to let Konstantia know. Her email is goldfalcon@calontir.org.