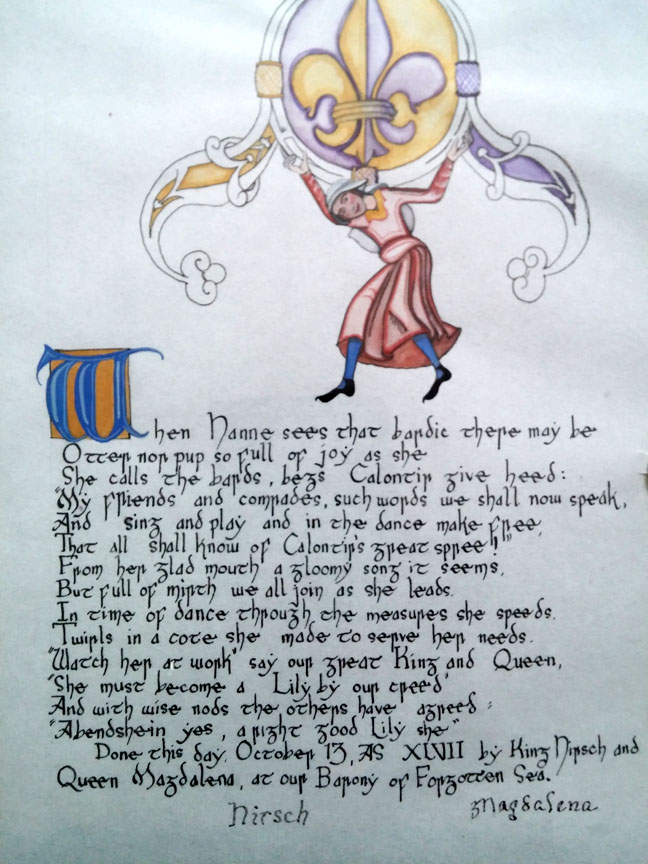 When Hanne sees that bardic, there may be

otter nor pup so full of joy as she

She calls the bards, begs Calontiri give heed

“My friends and comrades, such words we shall now speak

And sing and play and in the dance make free

That all shall know of Calontir’s great spree!”

From her glad mouth a gloomy song it seems

But full of mirth we all join as she leads

In time of dance through the measures she speeds

Twirls in a cote she made to serve her needs

“Watch her at work,” say our great King and Queen

“She must become a Lily by Our creed.”

And with wise nods, the others have agreed.

And Queen Magdalena, at Our Barony of Forgotten Sea.

As 12th Cent. Anglo-Norman: decasyllabic; caesura after 4th syllable; 10th syllables use assonance (‘ee’ in this case) throughout the stanza.
Inspired by something Hanne performs–the 88th stanza of Sayer’s translation of The Song of Roland:
When Roland sees that battle there must be,
Leopard nor lion ne’er grew so fierce as he.
He calls the French, bids Oliver give heed:
“Sir friend and comrade, such words you shall not speak!
When the king gave us the French to serve this need
These twenty thousand he chose to do the deed;
And well he knew not one would flinch or flee.
Men must endure much hardship for their liege,
And bear for him great cold and burning heat,
Suffer sharp wounds, and let their bodies bleed.
Smite with your lance, and I with my good steel,
My Durendal the Emperor gave to me:
And if I die, who gets it may agree
That he who bore it, a right good knight was he.” 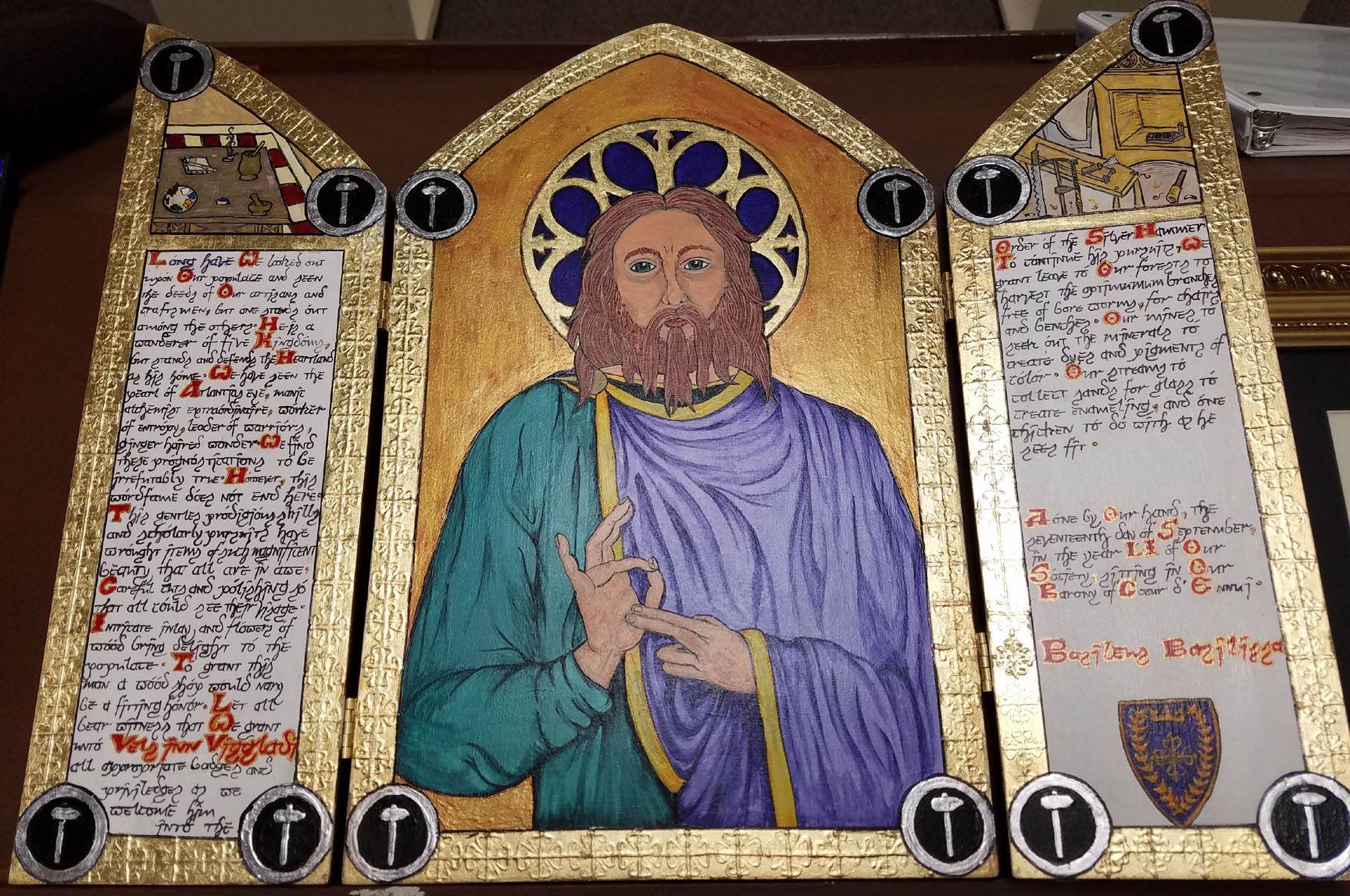 Long have We looked out upon Our populace and have seen the deeds of Our artisans and craftsmen but one stands out among others. He is a wanderer of five Kingdoms but stands and defends the Heartland as his home. We have seen the pearl of Atlantia’s eye, manic alchemist extraordinaire, worker of entropy, leader of warriors, ginger haired wonder, and We find these prognostications to be irrefutably true; however this wordfame does not end here.

This gentle’s prodigious skills and scholarly pursuits have wrought items of such magnificent beauty that all are in awe. Careful cuts and polishing so that all could see their visage, intricate inlay and flowers of wood bring delight to the populace. To grant this man a wood shop would nary be a fitting honor.

Let all bear witness that We grant unto Viga-Valr viligísl all appropriate badges and privileges as we welcome him into the Order of the Silver Hammer.

To continue his pursuits, We grant leave to Our forests to harvest the optimum branches free of bore worms for chairs and benches, Our mines to seek out the minerals to create dyes and pigments of color, Our streams to collect sands for glass to create enameling and one chicken to do with as he sees fit.

Done by our hand, the seventeenth day of September, in the year 51 of Our Society sitting in Our Barony of Coeur d’Ennui.