At the July 2013 Board Meeting, the Additional Peerage Exploratory Committee (“APEC”) proposed that the Board of Directors create a new Patent-bearing Peerage Order parallel to the Orders of the Chivalry, the Laurel and the Pelican. This Rapier Peerage would be for the related martial arts of rapier and all forms of cut & thrust in the SCA. In August of 2013, the APEC’s proposal for name, heraldry and badge was sent out to the membership for commentary, and a second committee was formed of representatives appointed by the Kingdoms of the Known World to review the proposal and represent their interests. After reviewing all commentary received from the membership and the committees, the Board believes there is enough interest to request further commentary on the changes that would be required to Corpora if the Board decides to create such an Order. This will be the final opportunity for the membership to make its opinions and wishes known on this subject as the Board will vote at the January 2015 Board meeting on whether or not to create this Order.

In the event a rapier/cut & thrust peerage is created, the following would be the proposed changes to Corpora (additions in red; deletions in blue and struck out.)

A. Patents of Arms

2. Order of Precedence Within the Peerage
DELETE
[The Crown may establish the order of precedence within the peerage according to the laws and customs of the kingdom. However, the Chivalry, the Laurel, and the Pelican, and Defense are of equal precedence and must be considered as one group.]

ADD
The Crown may establish the order of precedence within the peerage according to the laws and customs of the kingdom. However, the orders of the Chivalry, the Laurel, and the Pelican, and Defense are of equal precedence and must be considered as one group.

d. The Order of Defense:
(i) Members of the Order of Defense may choose to swear fealty, but are not required to do so. The candidate must be considered the equal of his or her prospective peers with the basic weapons of rapier and/or cut-and-thrust combat. The candidate must have applied this skill and/or knowledge for the instruction of members and service to the kingdom to an extent above and beyond that normally expected of members of the Society.

(2) The duties of the members of the order are as follows:

(a)    To set an example of courtesy and chivalrous conduct on and off the field of honor.
(b)    To respect the Crown of the kingdom; to support and uphold the laws of the kingdom and Corpora.
(c)    If in fealty, to support and uphold the Crown of his or her kingdom.
(d)    To enrich the kingdom by sharing his or her knowledge and skills.
(e)    To enhance the renown and defend the honor of the peer’s Lady or Lord.
(f)    To advise the Crown on the advancement of candidates for the Order of Defense

D. Titles
4. The titles listed here are considered standard, and may be used by those who have earned or been granted the appropriate rank or award within the Society. The College of Arms publishes a more extensive list of titles and alternative forms, which may also be used freely by qualified persons. In addition, the College of Arms has full approval authority over new alternative titles, which must be added to their list before being released for use in the Society.

Master/Mistress
Members of the Orders of the Laurel, the Pelican, and Mastery of Arms.]

Master/Mistress
Members of the Orders of the Laurel, the Pelican, Mastery of Arms, and Defense.

[This last might need some explanation. The current Section IX.C is a holdover from a Governing and Policy decision from October 1979, when the Board decided that rapier combat would be allowed in the SCA as an ancillary activity. Rapier combat is no longer considered an ancillary activity and has not been for many years. Also, the duties of the Society Earl Marshal are properly defined in section VI.D. So this section is reduced to a single clear, unambiguous rule.]

You may also email comments@lists.sca.org.

This announcement is an official informational release by the Society for Creative Anachronism , Inc.  Permission is granted to reproduce this announcement in its entirety in newsletters, websites and electronic mailing lists.

The crash space coordinator for this event is Francisca and she can be contacted at ladyfranciscadeleon@gmail.com 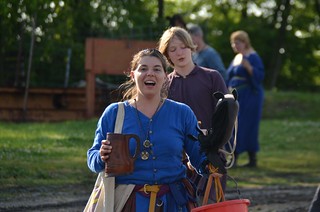 Vilhelm has posted many of his recent photos from Horse and Falcon.

Be sure to check them out, and watch his Photostream for more.

Rain early in the day cleared off and the weather was fine for fighting. Turn out was light, but there was plenty of fighting for all. Her Royal Highness Gwen A’Brooke was in attendance and gave prizes to the winners.